One of our hardworking SAMs on round for trash pick up. Credit: Kristen Franklin 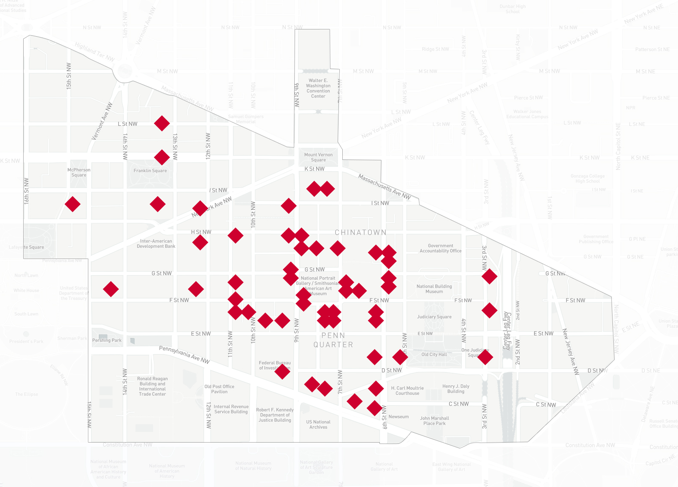 We make DowntownDC So Much More!

What began as an idea based off a 1997 National Capital Planning Commission study became a reality in 2005 when the DC Circulator opened two routes connecting the new Walter E. Washington Convention Center in DowntownDC to the Southwest Waterfront and from Union Station to Georgetown along K Street in Downtown. The idea was to create a surface transportation alternative that circulated people across the city and for that service to be accessible, affordable and frequent, requiring no maps or timetables. That mission continues to be upheld by today’s DC Circulator system, which now has five routes including one that extends to Rosslyn, Va., and served 5.7 million riders in the year 2012.

The bikeshare system now known as Capital Bikeshare was piloted in the BID in Aug. 2008 as the first bikesharing system in North America. Back then, the SmartBike DC system consisted of 120 bikes in 10 stations, six of which were located in the BID. Today, the Capital Bikeshare system offers over 2500 bikes at more than 300 stations in the District and in areas of Maryland and Virginia.

The practice of displaying complete, city-wide bus maps on bus shelters was piloted in the BID, offering bus riders for the first time extensive print maps of multiple bus routes in convenient locations. The project was unveiled in 2004 by the BID, DDOT, city council member Jim Graham and Clear Channel Adshel. Today, many bus shelters display this information, which permits riders to see connecting routes and destination locations.

The BID had the idea to plant flowers in some of the treeboxes in Downtown. Prominent developer Doug Jemal of Douglas Development noticed the plantings and inquired about adding flowers to boxes surrounding his property. After Douglas Development added flowers to some of their treeboxes, the practice took off and today we can see many flowering and seasonal plantings in treeboxes across the city.

The extension of the Washington Metropolitan Area Transit Authority’s (WMATA) Metrorail hours beyond midnight was a response to the opening of the Walter E. Washington Convention Center in the BID, which often led to a glut of metro riders in the late evening hours following events. Metro in 1999 agreed to expand hours until 1 a.m. on Saturday and Sunday mornings. In 2007, weekend closing times were moved to 3 a.m.

The red, grey and yellow design created for the DC Circulator by the BID and partners involved in the Circulator was copied by the city in an effort to create a recognizable family of services for the District. It is visible in the streetcar design, baked into the colors of Capital Bikeshare and the red color was also adopted by D.C. taxicabs, which recently achieved uniform branding with the help of the BID.

The streetscapes now ubiquitous throughout the District (black fluted metal trash cans, black bench designs, black painted streetlamp poles, pendant lighting versus cobra lighting and other light systems) were all first piloted in the BID in the late 90s when the BID sought to standardize streetscapes in Downtown. DDOT took notice, and adopted the BID’s “Streetscape Standards” as guidelines for city regulations that went into effect in early 2000. Today, those guidelines are part of all Downtown street reconstruction and resurfacing contracts.

The blue wayfinding signs in D.C. that help point visitors to landmarks, transportation and other destinations were developed and standardized by the BID in a formal process that began in 1998. After financing and developing a system through work with our partners, signs were implemented in the BID and several key locations outside of the BID District. Since then, the system has been handed off to DDOT, which has implemented the BID’s signage system throughout the entire city.